Mildred Pierce was a very well-regarded restaurant in Toronto (particularly their brunch menu), and their name would always pop up in conversations about reliable downtown restaurants. They ultimately shuttered around 10 years ago, but resurfaced in Liberty Village as Mildred’s Temple Kitchen. I’ve been to MTK only once before, for their winterlicious offering, and remembered that everything was very competent.

M and I were invited to Mildred’s Temple Kitchen for a complimentary sampling of their new dinner menu. The updated menu focuses on adding more share dishes, as they noticed patrons looking to share their mains, preferring to chat and sample foods over a longer seating. They also made adjustments to their hours of operations to reflect a increased focus on later dinners and longer brunch hours.

Mildred’s features an open kitchen, where you can observes the chefs playing their craft furiously and sending out plates. The tables are comfortably spaced, with soft fabric banquette booths. We noticed that unlike other restaurants, MTK made the decision not to blare music over speakers. Despite having solid interiors (concrete & glass, rather than carpeted walls or drapes), the ambient din was very pleasant, so that nobody would have to shout over the music and adjacent tables. 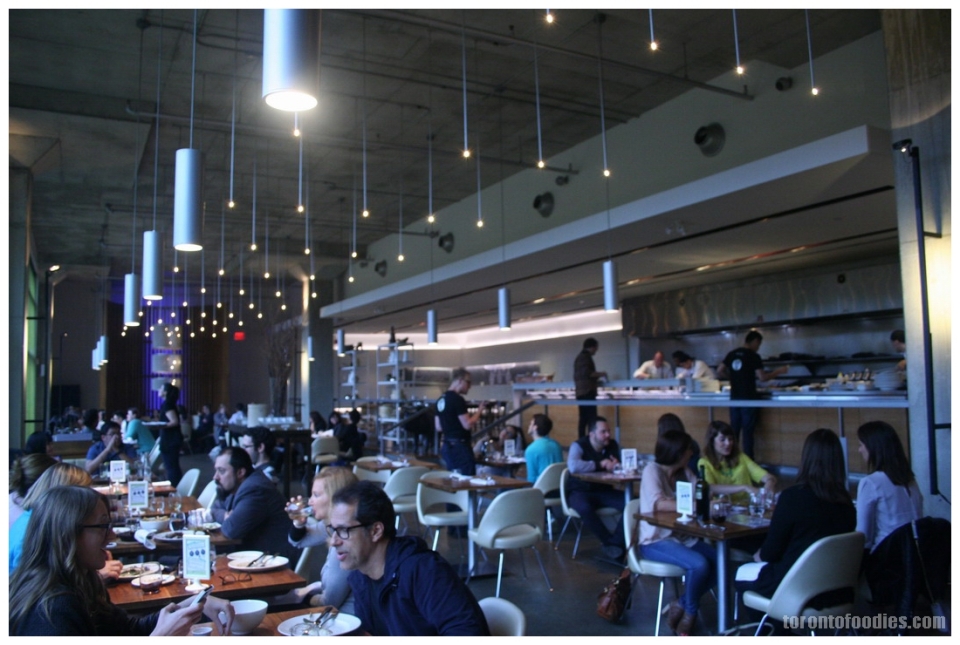 The broccoli evokes classic asian flavours, using sweet-salt-spice combination. The black sesame was an unusual but welcome ingredient, adding crunch and crackles to each bite. The peanuts, unfortunately, refused to cling to the broccoli, and tumbling into rubble at the bottom of the plate.
The florets were cooked to perfect firmness — no stringiness, yet not mushy either. Unfortunately, this dish did not hold up by the end of the meal, as the florets started to sog up the sauce and lose thier texture. Finishing the plate started to feel like a chore than a pleasure to finish; there are a lot of florets, and took a while for the two of us to finish the plate. These might have been better as a small side serving of 4-5 florets, complementing another dish.

The first dish to hit the table had us absolutely floored. The sizzling cast iron skillet had large, chunky mushrooms glistening, garlic aromas wafting. The generous helping of tableside-shredded pecorino cheese blanketed like fresh snow, adding to the comforting richness. Nuggets of delicious browned bits clung to the pan-fried kale, giving bursts of intense salty-sweet umami. Occasional crackles of pepper, brightening up the potential monotony of otherwise heavily earthy dish. Easily a dish that I would recommend to anyone who enjoys mushrooms and garlic. An order of bread would have been brilliant to go alongside this dish, to sop up the remaining garlic vinaigrette, melted cheese, and browned garlic nuggets. 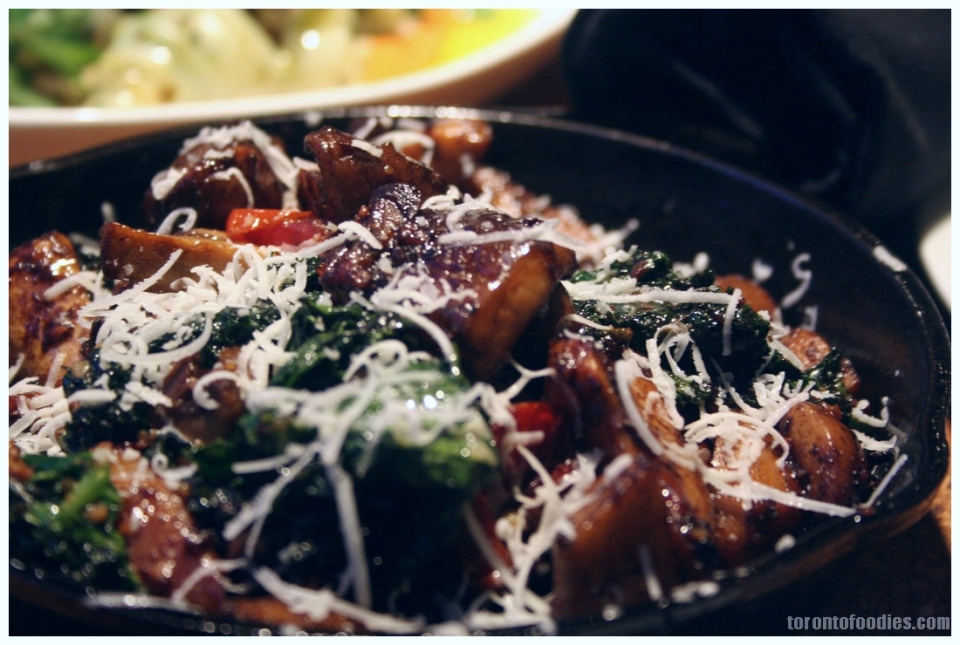 This traditional Argentinian dish featured a flavourfully seared piece of steak, topped with chimichurri sauce and grated boiled eggs. The finely pureed chimichurri sauce was potent, the prominent flavour being tartness, with a bit of garlic; the herbs used were not as prominent. The chimichurri, along with the tomatoes, contrasted starkly with the steak — M felt the chimichurri may even have overpowered the steak. The sauteed green beans, while well-executed on their own, felt very disjointed from the other elements of the plate. Their inclusion on the dish felt forced, but I suppose they bring nutritional balance to the meal. I’m also not sure if this would be a greatest “share” dish, with the grated eggs crumbling easily (though as a personal dish, it’s fine, and the steak itself was fantastic).

This was the other standout dishes of the evening, though it may be hit-or-miss for others. The plate has around 2-3 full squids, bodies scored but intact, tentacles separated. ‘Fresh’ is the word – the squid tastes of the briny sea freshness, unlike the neutral and rubbery calamari that we’ve grown accustomed to. MTK cooked the squid just-done, so that the meat is tender, almost sashimi-like. The natural oceanic smell and flavour of the squid, tempered by the white beans neutrality and the green olive’s complexity (minus the usual olive saltiness), along with a splash of romesco, was very cohesive, and well thought out. Even if you’re not a fan of green olives, you might still enjoy how well the dish works together.

The night’s seasonal crumble was made with rhubarb. The pistachio crumble reminded me of Soan Papdi(http://i.ytimg.com/vi/IUTLxqTGpZo/maxresdefault.jpg), with its hints of cardamom flavour. M noted that the ice cream was unique but extremely familiar – turns out their daily ice cream was ginger. This added to the masala-chai-like combination of the flavours. The generous stalks of rhubard was something new to me, almost like boiled celery, still having plump and fibrous texture despite being cooked through. Interestingly, the rhubarb and crumble paired well, and the crumble and ice cream paired well — the rhubarb plus ice cream didn’t quite complement each, the rhubarb almost too sour and contrasting. Incidentally, I was at Slickers Ice Cream in Prince Edward County recently, and they featured a Rhubarb & Ginger ice cream. Ultimately, the serving portion was too much (though hardly a complaint, just a note), and I was unable to finish the crumble, after such a huge dinner. 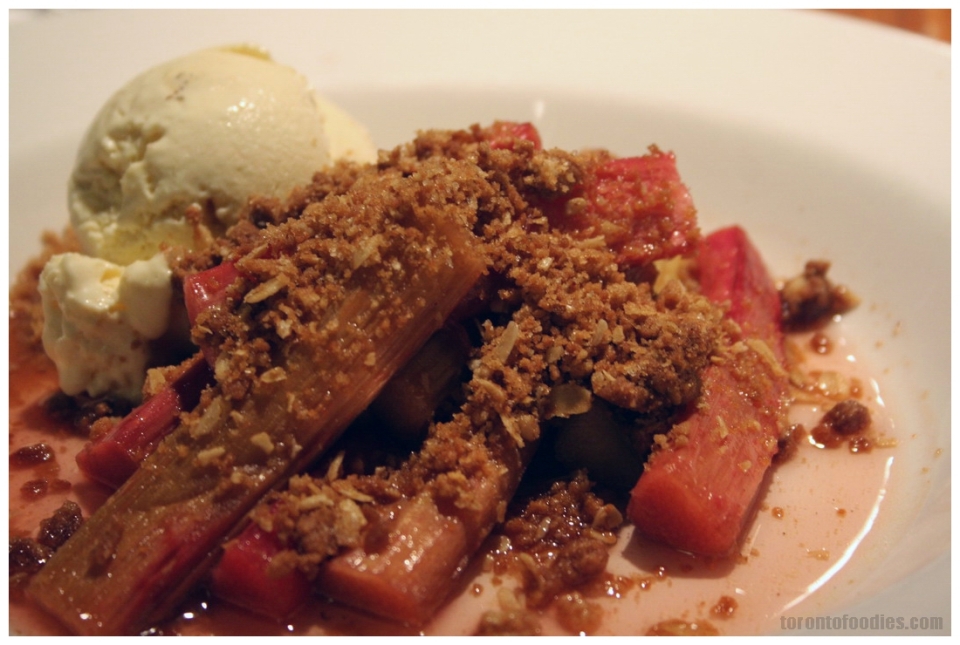 Overwhelmingly (and surprisingly) stuffed with food, we decided that a single profiterole should be enough. The ice cream definitely exhibited the distinct flavour of Lindt milk chocolates, a large scoop sandwiched between choux pastry atop a reflecting pool of marbled chocolate and caramel. Unfortunately, the choux felt gritty, likely the result of being chilled or being too close to the ice cream, though M didn’t notice at all. We ordered a second so M could have her fill, but I noticed the same grittiness in the second serving as well.

I rarely find myself in Liberty Village, so while I might not personally make a cross-town trek to solely to eat there, I would never dissuade anyone from a meal at Mildred’s Temple Kitchen. As with my previous impression, their dishes feature great fresh ingredients, and their execution is fantastic. If I’m in the area, I would definitely suggest MTK.

This meal was complimentary, and I thank Mildred’s Temple Kitchen for the opportunity to sample their new menu.